Her joyful, captivating personality is infectiously reflected in her music, her lyricism themed around relationships, obsessions and the human journeys that life takes you on.

Wake You features five tracks of electrifying guitars and upbeat production, including the singles Call You My Own and Pixie.

Valerie is actively involved with Female Frequency, a collective dedicated to empowering women in the music industry that hosted a Sofar Sounds secret show earlier this week.

Gina Garcia met her there for a chat about her latest release, her thoughts on the increased importance of art in today’s world, and what fans can expect from her EP launch tonight in New York City.

How does it feel to release your new EP, Wake You, for everyone to hear?

Valerie: “It feels great! I mean, it’s not my first release. I’ve released two albums, a bunch of singles and even a best of album. But Wake You feels different.

“Most of the songs I wrote on acoustic guitar, and I produced my own demos in Logic Pro before collaborating with other producers to really bring them to life. Because of that, and my intention to explore new sounds, Wake You is introducing, exposing a new sound and a different artist than I was before. And, yeah, that feels great.”

What was the creative process behind the songwriting and recording for the EP?

Valerie: “I don’t have one particular creative process anymore. It used to be a journal, followed by strumming my guitar, playing with my band or hitting a drum. Then I did a bit of co-writing, in a somewhat traditional way, in a windowless room with another writer! I even spent a bit of time in Nashville to soak up clever writing techniques.

“About halfway through working on this EP in early 2016, I started learning Ableton Live and how to make beats and produce music that I really dig. At the same time, I was toplining for a production library, which means writing melodies and lyrics over someone else’s tracks. So I started doing that over my own tracks, humming nonsense words until they made sense.

“I also built a home studio, so I can record any time I want in my Brooklyn apartment. In fact, the room is so small that I built a loft bed and put my studio under it. I call it Lost Sox Studios.”

Talk to me about your EP. Where were you in life?

Valerie: “I had moved to New York City a couple years before I started working on the EP and was itching to release new music. I had a ton of half-written, unrecorded songs and was writing a lot, but nothing was clicking.

“Wake You came together by steadily working with a great producer, Devon Johnson, and then on the last song Make Your Move with hip-hop producer Optiks.

What’s your favourite lyric on the new EP?

Valerie: “‘My heart like a basement, damp, dark and dirty’. It’s the first line of Love You Back. Oh, man, that is exactly how I was feeling after a few rough years in the NYC dating scene! It was going to take someone strong and persistent to get me to dust off my heart. Of course, the ‘dirty’ metaphor could be taken to mean a few things…”

What do you hope your listeners get from your music?

Valerie: “Motivation and inspiration. I think everyone can use a bit of both right now.”

Given current events in the news and the world, do you believe forms of art like music are now more important than ever?

Valerie: “Yes! We need everyone to do everything and anything they can to stop the tyranny of Trump!

“God, that sounded dramatic, but what’s crazy is that it’s absolutely true! We need artists and musicians to bring people together, to give people hope. That has been an important role for artists during catastrophes of all sorts throughout history.

“I have to remind myself when I feel helpless that I have something important to give. I can’t let depression at the state of the world stop me from making music. Now, more than ever, I have to produce music and get out there and play to motivate and inspire.”

You’re playing at Mercury Lounge in New York City tonight. What can we expect from your show?

Valerie: “A full rockin’ band, with live instruments and electronics. I’m so excited that Devon will be playing synth, and my collaborator Lauren Sky will be on bass and backing vocals, along with my dear friends and amazing singers Kathy Comperatore and Rachel Walker.

“Attis Clopton, as usual, will be on drums. We co-produced an industrial rock version of Fiona Apple’s Criminal and a legit dance version of Nirvana’s Smells Like Teen Spirit together.

“We’ll be performing a surprise dance pop cover tonight – to not only honour all of the idols we lost in 2016, but also to uplift and heal the audience – and the performers! We need as much healing and hope as possible right now.”

What are your plans from here?

Valerie: “Tonight’s the big night, and then I’ll sleep, haha! I am playing an experimental show called The Plunge in NYC on 19 March, and then hoping to hit the US coasts as well as Europe with the EP. And, of course, I’ll be writing the next one.”

Valerie Orth’s Wake You EP is out now. She’s performing with a full band at the launch tonight at New York City’s Mercury Lounge. 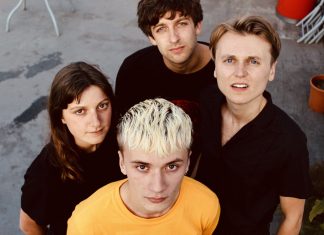