For this week’s Artist Playlist, we made a curator of Emelie Alatalo, the vocalist with Swedish indie rock darlings Agent blå.

The Gothenburg group have become one of our favourite bands from the Swedish scene, and by performing predominantly in English they’ve also won over plenty of admirers abroad, securing a U.S. record deal with Kanine Records in addition to their contract at home with Luxury.

Emelie is joined in Agent blå by Josefine Täck, Lucas Gustavsson, Felix Skörvald, Arvid Christensen and Tobias Bauer. Their debut album, as a five-piece, was released in the summer of last year, followed up by a four-track EP, Medium Rare, this June.

The Artist Playlist is our way of giving musicians, usually the curated, the opportunity to curate a playlist of their own, harnessing their passion for music to receive great recommendations, learn about the music they love, and get closer to their own influences and tastes.

We’re asking a new musician to take part each week, giving them free reign to select ten tracks and tell us all about them, as well as one favourite from their own past output.

In the first edition last week, we learnt all about the personal tastes and influences of Dead Naked Hippies’ Lucy Jowett. In this week’s entry, Emelie delves deep into her childhood loves plus the music she adores today, picking out Swedish pop and punk and more worldly rock and riot grrrl.

On her music taste, Emelie told us that her first favourite band was Green Day: “I adored them, and finally got to see them live in Gothenburg, for the first and last time in 2010. Shortly after I realized that being 13 years old and wearing my own weight in eyeliner, I had to listen to something heavier. So I started to listen to My Chemical Romance and Marilyn Manson, Slipknot and Rammstein.

“I’ve always been someone that finds a band and gets too involved. I had a period where I listened exclusively to Håkan Hellström, Broder Daniel and Kent, and every wall in my room was covered with their faces.

“Somewhere around that time, when I was maybe 15 or 16, I started listening to more Swedish music, more indie pop, and fell in love with those bands. You could say that the sheer existence of those bands is the foundation which Agent blå grew on, since we all met through our shared love for them.”

An audio fanatic, Emelie admits to listening to music all of the time, except shortly before going on stage. She’s also big on vinyl, despite lacking a turntable: “I think I like the authenticity of being able to own and hold a vinyl, and getting up in the middle of the record to flip sides. I’m also aware that’s a really pretentious thing to say, haha!”

Read on for Emelie’s picks, or head straight for the music and check out all of the tracks she selected on the Spotify playlist here.

Broder Daniel
When We Were Winning

Emelie says: “I just had to include Broder Daniel on this list. They might be the band we’re getting compared to the most, and I think that it always gets a little tiresome being compared to the same band over and over again, like it doesn’t matter what your own music sounds like anymore.

“But, they’re also the band I spent many years obsessing over when I was younger, so I can’t be too cranky about the comparison. If you want to make a whole club full of youngsters, including me, both cheer and weep at the same time, this is the song to play!”

Emelie says: “I love to listen to this song whenever things just feel hopeless. It makes me think of the whole riot grrrl movement, and it just makes me feel so fucking grateful.

“I especially find Kathleen Hanna so fascinating, and I wish that I could sit down with her for a conversation, even just for a few minutes.”

Emelie says: “This record is one of the best records I own. It’s just such a winner all the way through, and I think that this was the first song I heard from it.

“Amanda Bergman’s voice has always been like a gentle pat on the back for me, or the one tucking you in when you just don’t want to do anything but lay in bed listening to the same record over and over again. It just makes me feel calm.”

Marilyn Manson
Dried Up, Tied and Dead To The World

Emelie says: “This song is the black sheep of this playlist, but I didn’t have the heart to scrap it. Marilyn Manson is the soundtrack to my early teens, when nothing mattered more than quirky clip-ons, my then girlfriend’s Marilyn Manson t-shirt, and who had the biggest rips in their stockings.

“I think this period of my life was when I really started to care about music in a way I hadn’t done before. It became more than just something to listen to, it became my entire personality. Whenever I listen to him I get thrown back to that time, and there’s something weirdly soothing about that.

“I will never forget the look on my boyfriend’s face when we found out about our shared love for him. It was like a buried guilty pleasure had just resurfaced and was suddenly okay for us to openly like. Nowadays this is my go-to song whenever I’m going out, to get in the right ‘fuck you’ mood!”

Emelie says: “This is by far my favourite band to watch live. They have a ridiculous amount of energy on stage, which is impossible not to absorb when you’re standing in the crowd.

“One of my top memories with this band is from maybe one year ago when I went to a gig with one of my best friends. The venue was overflowing with people, so you couldn’t stand still, but nobody wanted to anyway. It felt like the whole audience was one giant family, celebrating together.”

Emelie says: “Kent is, just like Broder Daniel, a band that opened me up to the Swedish pop scene. I had Jocke Berg’s lyrics written across the walls of my childhood room, and I can’t count the times I’ve cried thinking that this is the only band in the world that knows how it feels to be me.

“Even though I’m not sixteen anymore, I still love this band just as much. They were definitely a big motivation to start playing music in the first place.”

Emelie says: “I love this really iconic band, and especially this song, much for its childish seriousness. It’s full of irritation, but dealt with by seemingly not giving a damn. I usually find myself listening to it in the mornings while on my way to school, to lose a bit of morning temper. It’s somehow a little refreshing.”

Emelie says: “Parenthetical Girls have, hands down, been my absolute favourite band since the day I found out about them. There’s something about how their songs are bursting with both arrogance and humility at the same time, both in their lyrics and instrumentally. It never fails to amaze me.

“If I ever run into a genie in a bottle my one wish would be to get to collaborate with Zac Pennington, or to cut his brain open and marvel over the wonders going on inside.”

Emelie says: “When we started Agent blå, we were all really big fans of Makthaverskan, and wished there would come a time that we might even be signed to the same record label [Luxury Records] as them. Flash forward a couple of months, and we were, and still are!

“They have definitely been a big influence on our music, and since everyone on Luxury is like a little family, they’ve also become great friends to us all. They’re all really talented, and really great people!”

Emelie says: “This song is the root of one of my favourite tour memories. We were driving home from a gig in Uppsala, and I was sitting in the front seat when this song came on.

“There had been this amazing sunset happening before us for some time, but when this was playing the sky had just become dark and starry. It was one of the most beautiful things I’ve ever seen, and this song captured it so well, and tied the whole weekend together.”

Agent blå
Another Reason to Cut Off An Ear

Emelie says: “This song is a really fun one to play live! It usually fires up the audience, which is such a fun thing to watch from the stage.

“It’s a pretty upbeat and happy sounding song, but at the same time, I really think it’s one of our sadder songs lyrically. I was in a really weird place in my life while writing these lyrics, and I was telling myself that if I acted like everything was fine, I would eventually feel fine.

“Looking back at this song now, I realise that the lyrics that seemed kind of happy then are really quite sad and out of place. I was writing about some kind of fear, but it was already happening. But that also gives the song another push, and makes it even more fun to perform.”

Agent blå’s Medium Rare EP is out now, available digitally and on 12″ via Luxury Records in Sweden, Kanine Records in the US and Through Love Records in Germany, and on CD via 2670 Records. 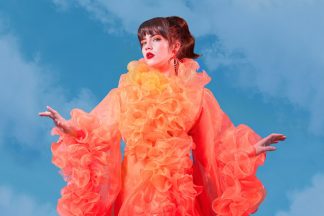